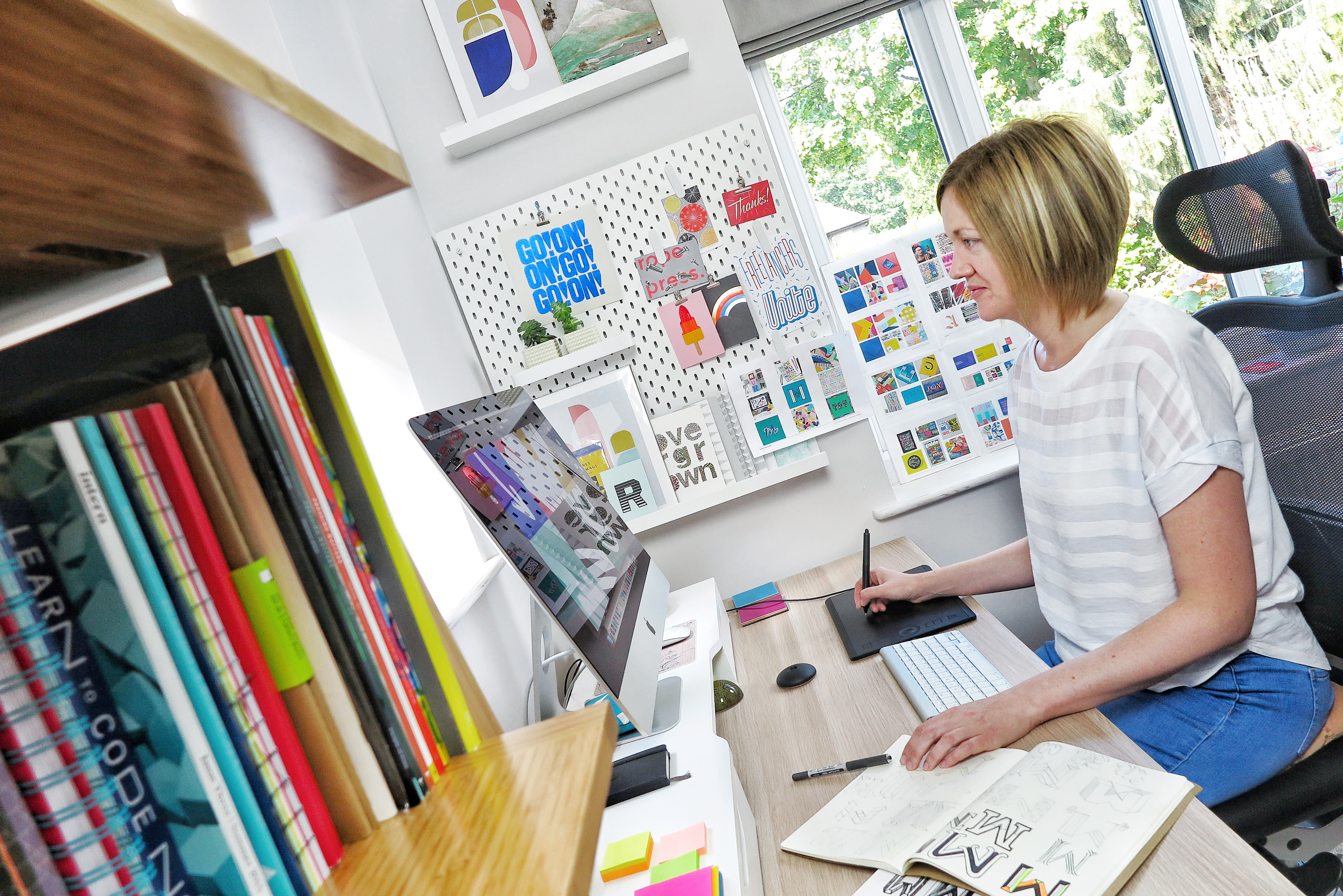 We’re honoured to be sharing, for the first time, an interview with Mary Hemingway next. As she explains, rather too modestly we think, she’s a Graphic Designer – agency and freelance – who also likes to ‘dabble’ in illustration, photography and surface pattern design. She’s Founder and Creative Director of the incredible Design by Women (DbyW) platform, and a mama, too. Basically, she’s a powerhouse. In this chat, she shares where she started (textile design!), why she was inspired to launch DbyW during lockdown, and more. This feature was first published in our FREE book, CREATIVE JOURNEYS: Career Insights from 21+ Forward-Thinking Creatives, which is available to download now!

I’m primarily a graphic designer but I also like to dabble in illustration and photography, and I love a bit of surface pattern design. Alongside working part-time in a design agency, and taking on the occasional freelance project, I run creative platform Design by Women which I founded in June 2020 as a self-initiated lockdown project.

My career has been a very winding path to say the least! Way back when I did a degree in textile design and started out working as a sample cutter and embroidery designer for a company that made wedding dresses. I then worked in retail sales for several years before having my son. I juggled single motherhood with various part-time jobs, including a stint in teaching. During this time, I completed a masters in surface pattern design and eventually decided to retrain in graphic design ten years ago.

This is an interesting question. Currently, I’m spinning a lot of plates and trying to work out what projects I want to put my time and energy into. I’m just finishing up a lovely freelance re-branding project for a designer-maker duo based in the Jewellery Quarter in Birmingham, and recently worked on a fun project, with the agency I’m at, where we got to work with a plant stylist on design work for a display at Chelsea Flower Show.

I’m also working, with the Design by Women team, on a careers series that launched at the beginning of July. One of the reasons I founded the DbyW platform is that when you hear about successful women designers the same few names keep coming up and I wanted to find out more about all the other talented creatives out there. We primarily post articles featuring established women, or gender expansive designers, who create inspiring work and/or have an interesting story to tell. Plus, we have a ‘Ones to Watch’ series where we showcase emerging talent.

We were having trouble featuring creatives who work in design agencies, studios and in-house roles because there are often NDAs on what they create, or they are part of a team of designers. This sparked the thought that we should do a series focused on career paths, which we hope will be useful for designers thinking about progressing from mid-weight to senior or senior to creative director etc. But also, we hope to inspire emerging creatives by showing them the different routes they can take in the design industry. It will primarily focus on career journeys, pivotal moments, and advice for creatives (at any stage) looking to take the next step in their careers.

I’m going for a run shortly! I’d like to be able to carve out more time for Design by Women and take on some more varied freelance work for projects that use design as a tool for social change. There’s a lot happening in the world right now and sometimes that can be overwhelming, so I’d also really like to take some time to figure out where I want to be in the next few years—it’s something I’m currently working through.

Today my son had his last A Level exam after a month of intense revision, so we’re celebrating that! I have quite a few admin tasks to do for DbyW – keeping on top of them almost seems a job in itself sometimes. I’m also thinking I’d like to get back to doing some drawing and painting, which I haven’t done for years!

Thank you for sharing your journey, Mary. Make sure you keep up with Mary‘s work on her Instagram and website. Follow Design by Women and visit designby-women.com, too.

Want to be featured next? Get in touch with us for all the info.